Get More Out of LinkedIn 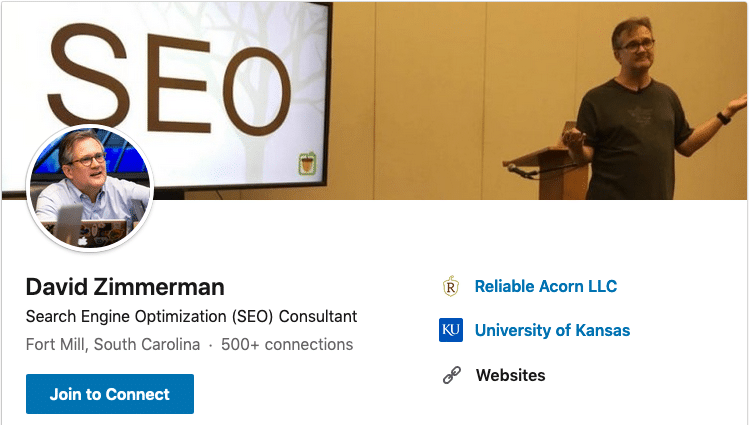 Home > Blog > Tips > Get More Out of LinkedIn

I spent August 2020 doing a little experiment on LinkedIn. I wanted to see if I could get more from my LinkedIn account.

I don’t know about you, but I’ve not been doing a good job networking lately. Maybe it’s motivation. Maybe I’m busy. Maybe it’s the worldwide pandemic. Either way this concerns me because I firmly believe that you should be doing networking when you don’t need to network.

Networking takes time. You need to make connections and build relationships. Sure, you can rush this- and make people in your network feel like they are being used, but it’s best done slowly, naturally, organically.

I was speaking with a business-coaching group, to which I belong, about this. Someone in that group reminded me: “David, you’ve got a good network of people already- start there!” Good point.

I’ve been developing my LinkedIn network for many years. I’ve carefully curated it with people I’ve actually met and many of which I’ve done actual business with. It’s a good list of people. It’s also relevant for business networking. THIS is where I should so my networking!

My goals of this were to:

How could I accomplish this?

I think social networking should be approached like in-person networking. There are definite differences, but effective social networking follows many of the same rules as in-person networking. For instance, if you meet someone in-person, it would be rude for you to immediately begin the conversation talking only about yourself. Instead, you’d get to know them and, as you do your own business and needs will naturally come forward. It’s not forced- it’s just getting to know someone.

I decided to go through each of my connections and classify them into one of four groupings:

If these are the four categories for LinkedIn followers, you can already see something about how you’d communicate with them. It would be awkward to ask an acquaintance to advocate for you. At the same time, it would be strange to approach someone with whom you regularly ask a question by only getting their attention. Really- how you interact with someone depends upon the category in which you fall.

But what does this mean from an interaction perspective? How can we know we’re getting more from networking? How do we know if we are moving them up in a category?

If this is what we want others to do for us, how do we encourage this behavior? I believe the Norm of Reciprocity helps us here. This means: if someone does something for you, you will do it for them. The best example of the Norm of Reciprocity is during Christmas. Have you ever received a gift from someone that you didn’t expect? What do you do when this happens? I bet you find a gift and send one to them. The funniest example of this is one time where I got caught in an endless loop of gratitude: I thanked someone for sending me a birthday card to which they responded with a thank you to my thank you which made me wonder if I needed to thank them for thanking them for my thank you. This is an effect of the Norm of Reciprocity. I think this can help us with our networking on LinkedIn.

I’d apply the Norm of Reciprocity on LinkedIn like this:

It would break the rules for me to skip a step in this. Let’s take this out of the digital world, for a moment, and into meatspace. What if I went up to a person with whom I’m acquainted and ask them for a recommendation? Awkward! That’s a little too far! What if I walked up to an acquaintance and started peppering them with questions? Well, that’s less awkward than asking them for a recommendation but it still could be a little off-putting since I don’t know them that well, yet. It’s better to approach an acquaintance and acknowledge them. If they are open to that (and they’ve moved from acquaintance to paying attention to me) then it’s more natural to begin to ask them some questions.

The same is true in the digital world, when fostering relationships over LinkedIn. Don’t skip steps in your relationships but move the relationship to the next, natural step.

I followed this process for a month (throughout August). This is what I learned.

This is hard work.

I gave myself a half our every work day to follow this process. I had to work hard to keep my own appointment! There was always something that came up that was more urgent than the long-term benefits of developing my LinkedIn network. As a result, I didn’t really follow this process every day. In fact, I pretty much stopped after 2 or 3 weeks.

I didn’t get much.

I set several goals from this effort: more traffic and leads from my website. I thought this would also improve my LinkedIn SSI score. I didn’t see the numbers change much.

Leads were the same between each month: 0

I did reconnect with one person who said, “by the way, could you help me with…” but that never materialized. Ironically, this same person suspected something was less than genuine in my outreach: “So, it seems you’re developing your network!”

What Would I Do Different?

Do a little at a time, when you can.

Doing this for a month, and then throwing in the towel, wasn’t the best way to do this. Instead, it would be better to simply do a little as time provided. There’s always those 5-10 minute gaps we can find to do a little something productive that seem to be wasted. Why not use those gaps to connect with someone with which you’ve lost touch on LinkedIn?

I attempted to apply the Norm of Reciprocity to LinkedIn. I thought that meant, if I want someone to notice me, I should notice them. What this ended-up looking like is me “Liking” a lot of posts- hoping someone would like one of mine. While this did give a little attention (I noticed some people with whom I had not had any contact in several years looked at my profile, probably thinking, “who the heck is this guy?”) it didn’t really do anything.

Instead of passively “liking” people on LinkedIn, I think I should have applied the Norm of Reciprocity a little harder. If I wanted someone to notice me, I should have asked them a question. In other words, I should have stepped up my efforts to progress our relationship further. For example:

What I like about this is that it’s not obnoxious (such as asking a stranger for a referral) but still attempting to progress the relationship a little further. That’s the point of networking, isn’t it?

What would you do different? What do you think I could have done better? Leave your comments below and share your thoughts with the rest of us!